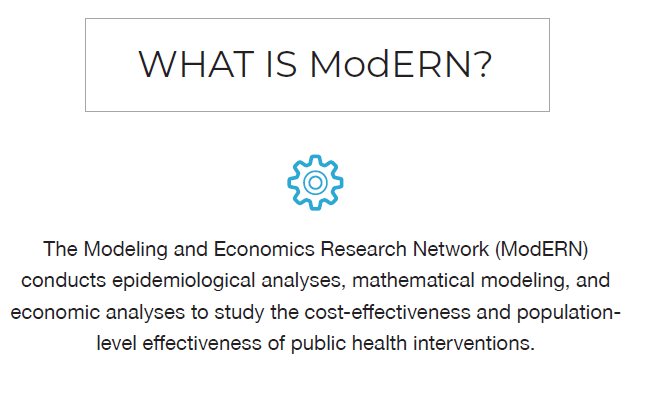 Modeling and economic studies are becoming increasingly important to inform and guide public health research and decision-making. The focus of the Modeling and Economics Research Network (ModERN) is to conduct epidemiological analyses, mathematical modeling, and economic analyses to study the cost-effectiveness and population-level effectiveness of public health interventions.

In 2017-2018, ModERN completed two studies led by Dr. David Fisman (University of Toronto), resulting in one published manuscript from the IDEA model (Seasonal influenza forecasting in real time using the incidence decay with exponential adjustment model, Open Forum of Infectious Diseases) and one manuscript in preparation about the effectiveness and cost-effectiveness of decennial pertussis booster for adults. Ashleigh McGirr, a graduate student supervised by Dr. Fisman, also submitted her PhD thesis in 2017 entitled Pertussis persistence in Ontario, which includes the development and calibration of a mathematical model of pertussis transmission in the community.

There are two ModERN studies that are currently in progress:

In addition, ModERN is currently implicated in two other network projects:

ModERN’s role in these two studies is to conduct mathematical modeling to assess the effect of measles, mumps and varicella waning immunity and variation in immunity between subgroups, to ultimately predict the risk of large outbreaks in Canada and to examine the effectiveness and/or cost-effectiveness of specific HPV vaccination strategies among gay, bisexual and MSM.

In 2018-2019, ModERN aims to complete CONNECT, the first population-based study of social and sexual contacts and mixing patterns in Canada, and the first worldwide study to measure both social and sexual contacts within the same study. By making data from CONNECT available to researchers across Canada, the contact data can be an impetus for novel infectious-disease modelling techniques and used to address new immunization policy questions. ModERN also aims to develop and calibrate the agent-based model of pertussis. Finally, ModERN will also develop a plan for new studies as part of the ModERN network and in collaboration with other CIRN networks. 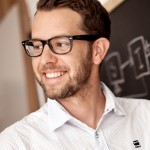 Dr. Marc Brisson is an Associate Professor at Université Laval where he holds a Canada Research Chair in Mathematical Modeling and Health Economics of Infectious Diseases.